Happy New Year!  We here at SARA hope you saw in 2018 with a glass of something bubbly in your hand and possibly wearing someone else's t-shirt.

Let's face it though, there's a good chance you were cleaning your teeth in your PJ's at 11:50pm, gave everyone a quick smooch at midnight, then raced off to bed to get to that book!


The last few months since our previous post, the SARA's have been busy whilst making plum puddings and repainting the ceilings after the champers corks hit the roof on December 31st.


Tess LeSue is on fire.  Bound for Eden, the first novel in the Frontiers of the Heart series, is available now.  The second, Bound for Sin, is due for release in September.  Get pre-ordering...

BOUND FOR SIN
WANTED: A resourceful frontiersman, for the purpose of matrimony…
When Georgiana Bee Blunt advertises for a husband, she’s not looking for a handsome man, or a smart man, or a charming man. What she wants is a brute. A no-nonsense, capable backwoodsman who won’t trouble her with talk of love; she just wants someone to get her and her fatherless children safely to California. Matt Slater seems to fit the bill perfectly. The man looks like he could wrestle a bear and not even break a sweat. The only problem is he doesn’t want a wife. Well, not the only problem…
Truth be told, Georgiana has more problems than she knows what to do with. Left holding a gold claim by her not-so-dearly departed husband, Georgiana finds her eldest son held ransom by the sinister Hec Boehm and his henchmen, and herself facing a journey of more than two thousand miles to rescue him. With four children in tow. And no nanny.
All Matt Slater wants is to be left alone. He’s spent most his life on his lonesome in the wilderness, and he’s comfortable that way. But then a widow with big blue eyes and the tenacity of a buffalo turns his entire life upside down and before he knows it he’s playing caretaker to a pack of kids…and trying not to succumb to their mother’s charms. 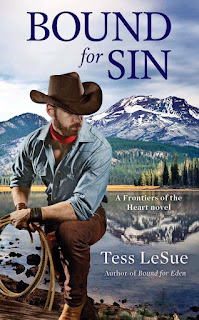 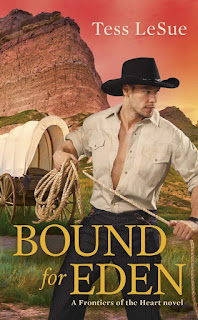 Virginia Taylor has a new release!  Golden Opportunity (Romance by Design) is now available where all good eBooks are sold.

The only thing Marigold Reynolds and billionaire Hagen Allbrook ever had in common was their attraction. Marigold made sure that never went anywhere by cutting ties with him six years ago. Now, however, she needs a job—and Hagen’s design assistant desperately needs someone to fill in for her at his family’s construction firm. Trusting that time has dimmed the electricity between them, Marigold accepts. But as she undertakes his challenging renovation of her own ancestors’ home, it’s soon clear she’s mistaken. 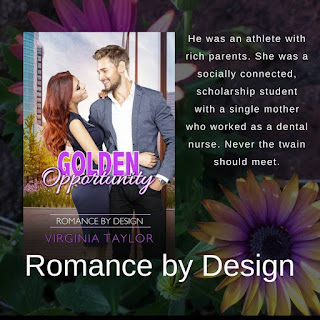 
Bella Bucannon is now on Facebook.  Find her here to keep up to date with all the latest BB news.

Posted by Emmeline Lock at 3:20 PM