Huge thanks to Eleni Konstantine, who has been running this column since it's inception.  She is also chock-full of awesome.

Now for the adventurous part of Sassy in the South--what we have been reading!


Just finished Tim Winton's Cloudstreet. I kept hearing about it since he was here recently and was keen to read something by an Aussie novelist. It's a sweeping family saga, expertly written. I wouldn't say it's a fave but the characters were beautifully authentic and (to me anyway, little Canadian girl that I am!) it was just so very Aussie, I loved that about it.

Year of the Flood by Margaret Atwood
Now I've moved on to Margaret Atwood's Year of the Flood. Atwood is a Canadian icon and a writing hero and legend for me; I especially loved one of her earlier works, Cat's Eye. Flood is a dystopian work, putting me in mind of A Handmaid's Tale, which I also really enjoyed. I am only just getting into it and wouldn't say I'm loving it so far, but... it's Atwood. I'm always hopeful that if by reading just a smidge of her writing genius rubs off on me I'll be a lucky girl. :)

Oh, and I almost forgot! I'm reading another Aussie writer, perhaps you've heard of her... a certain Ms Victoria Purman! Just got to some steamy bits (trust me to find those asap) in Nobody But Him. I don't want to reveal any spoilers but I'll just say Julia and Ry are YUM!

This is by my Wench of Word buddies, and is a lovely tale of Clancy, an American who wants to experience all Venice has to offer. She literally stumbles across Vittore, a Venetian native and he shows her Venice like she never imagined, including in the bedroom.
Taylor has created a enchanting story with old-world charm and sophistication, but with a sense of fun and flirtation. Not an easy task. A thoroughly excellent read.
It was also nice to read a story where the conflict is straight forward and suited the story. 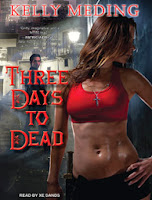 Three Days To Dead (Dreg City #1) by Kelly Meding - urban fantasy
4 stars
Evangleine Stone wakes up in the morgue in a stranger’s body. She doesn’t remember how she got there nor the last few days of her former life. She’s part of triad that hunts down Dregs (anything that is supernatural and bad). Or she was. She was being hunted and the last thing she remembers is the friends who gave her refuge being slaughtered by other Triads.
In her new body, she tries to find the only person she trusts, her handler, Wyatt. Their relationship seemed so straight forward to her in the past, but in her new body, new feelings awaken. Who is she now?
Evie is a smart-mouthed, sassy, heroine who doesn’t take any crap from anyone, including Wyatt. But we see a tender side to her also.
Vampires, halflings, goblins all feature in the underbelly of this city. An underbelly normal citizens don’t see.
I will definitely keep going with this series, as I’d like to see what other things happen in this city – a city that’s never given a name. I liked this as it could be almost anywhere. 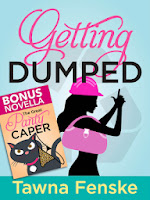 Getting Dumped (1&2), plus The Great Panty Caper by Tawna Fenske

I'm not sure when Tawna Fenske first started rocking my world.  It may have possibly been on Twitter, or maybe at a forum somewhere.  Anyway, wherever it was, Tawna's easy, chatty style impacted me.  She was irreverent, cheeky and hilarious.  Always a lady, but never especially ladylike, I love hanging around her blog, Don't Pet Me, I'm Writing because she is stunningly, effortlessly entertaining.  Through the blog, I found she had a book coming out before long - Making Waves.

I devoured that, then the next one, Believe it or Not, then waited rather impatiently for the next one to come out.

Getting Dumped was it.  From Coliloquy, it is a rather interesting take on women's fiction.  It's 'interactive'.  Think Choose Your Own Adventure.  With smooching.  And handbags.  And multiple hot fellas.

JJ Schultz is 'repositioned' by council from a desk job to one operating a compactor at the dump.  And she loves it.  She wears a pink hard hat, has a thing for handbags and shoes and, along with her sister, Lori, finds herself immersed in some amateur sleuthing.

Oh, and dangling a number of gorgeous men on her pinky finger.  Lucky girl! 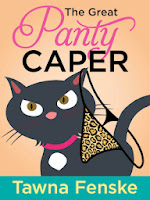 I really enjoyed reading this.  I was a bit distracted by the links in the ebook, you know, "Hit this link if you think JJ should call Pete/Collin/Daniel.", or "Hit this link if JJ is rescued by Collin/Pete/rescues herself.", but I never felt like the interactions between the characters was compromised.

Fenske has a way with character and plot that I adore.  I always spend half my time grinning while I'm reading.

Getting Dumped currently has two parts (Um, 1 & 2), and the one I read included a little bonus story about the Shultz sisters, The Great Panty Caper.

I gave it four and a half stars, because of the multiple men (Indecisive, but given these men, who wouldn't oscillate a little?), but taking into account the type of book it is, that's barely a complaint.  Really clever and witty stuff.  I want to be Tawna Fenske when I grow up.

Because I was having a completely understandable Tawna Fenske bender, I also picked up Eat Play Lust, a novella about a girl with food issues and the gourmet chef that wants her.

It was a compact read, but never gave an inch on the romance, the laughs or plot.  Very nicely done indeed.

I could have heated chef Paul up in the microwave and had him for breakfast. 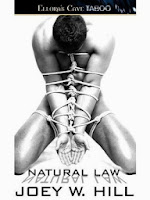 I found Mac--the submissive alpha hero--a riveting, insanely sexy character (had to read some parts with my head in the freezer) and Violet--the dominant, complex heroine--to be perfect.  With a twist or two, a seamless formation of the romantic relationship and a gorgeous ending, you can bet your bottom I'll be looking up more of Ms Hill's racier works.

Does it need saying?  **Warning ... so hot, you'll burn your iPad cover, and possibly your lounge chairs...**


Adios!  See you next time when we check in with more tales from our reading adventures!