SARA News - a new anthology to sate your reading cravings...

"Healing Carina (Book Three of the Dragons of Feury)" follows on from "Sealed with a Honeyed Kiss" (features in Edible Delights Anthology Volume 1) and "Becky's Journey". 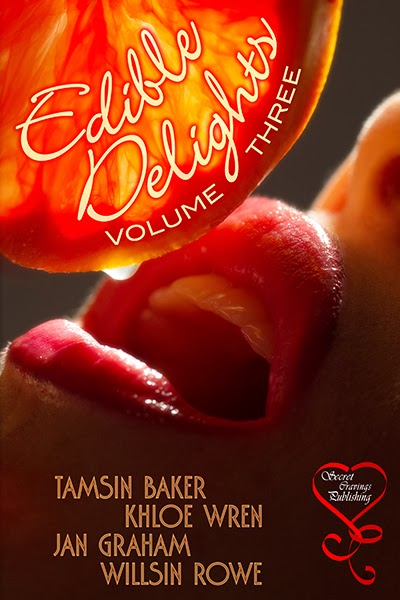 First Glance, First Bite
Lina is a four hundred year old vampire who doesn't believe in the fabled blood bond the original vampires talk about. That is, until she meets Benedict. An English lord that not only taste's better than any human ever has, but also shares with her, the most incredible sex.
Benedict hates his predictable, boring stressful life. Meeting the very sexually dominant Lina seems like the perfect way of escaping his world for a few hours, but she has something more permanent in mind.
Enter Antony, Lina's long time vampire lover and friend. Antony has long stopped caring about anything but his own pain over losing his mate. He is amazed at his attraction to Benedict.
Can two possessive and passionate vampire's make a relationship work with the one human they are destined to love, yet wants to continue his mortal existence?

Healing Carina
When Carina goes camping with her friends she's hoping her friends can help her heal from the horrific attack she suffered ten months ago. The day after she confesses all to her friends around a campfire, all five of them are blown through a portal to The Land of Feury.
Dragon shifters call The Land of Feury home. Brothers, Denver, Phelan and Hart, the clan's farmers, are excited when they discover Carina is their Desired; their destined mate. But can they help her heal from her from her past hurts? Will Carina ever be able to accept the attention of three men after being attacked?

A Tasty Little Treat
Faye Redwood is different to other humans. She sees supernatural beings. When it comes to surviving as a Seer, Faye always follows her grandmother’s advice, whatever you do, don’t let them feed on you.
As a result, Faye has managed to avoid being any creatures’ dinner for twenty-seven years now. A late night walk through the park and a chance encounter with a sexy vampire is about to change that situation for ever.
After being a creature of the night for the last two and a half centuries Owen Ashmore has become pragmatic about the human race. They are a source of food and a side order of carnal delight if the mood takes him. However, Owens opinion is about to change. Faye Redwood is unlike any human he’s ever met. He isn’t content to simply make her his tasty little treat, Owen is about to help her become so much more.

Vanilla
Douglas Blackwood stands to inherit a lot of money...as long as he takes over the family textile business. Desperate to find his own path in life, and to clear his head, he has taken an impulsive sabbatical to Mexico. A sabbatical that cost him his materialistic girlfriend.
With funds running low, he talks his way into some casual work at a vanilla plantation, run by siblings Domingo and Isabel Melendez.
Douglas finds Domingo dismissive and angry. Isabel, on the other hand, is beautiful, fiery, passionate...and off-limits. It’s not just that she’s engaged to Patricio, possibly the most beautiful man on the planet. She’s also treated like a princess by all the plantation’s workers. Whether she likes it or not.
Isabel’s dream in life is to remind the world of the delightful intensity of Mexican vanilla. No mean feat in a world that has come to believe “vanilla” is synonymous with “dull”.
When Douglas’s ignorance raises her ire, Isabel initiates the handsome American into the sensory power of pure vanilla. Using some unconventional, yet memorable, methods.
But what is the secret that makes—and keeps—Domingo so angry? How does that secret affect the engagement of Isabel and Patricio? And where does that leave Douglas?

Posted by Emmeline Lock at 5:44 PM