Emotion plays a very important part in romance writing. Without emotion, you end up with hollow empty characters that are just going through the motions. I believe, no matter your genre, emotion can improve every scene of a book. Here are a couple of examples of how emotion can make a difference:

The original text from my book, Her Guardian Angel:


‘Adele sucked in a breath; her butterflies were going berserk at the sight Dominic presented. He stood tall and confident, with his erection long, thick and pointing straight at her as if directing him. She took in his whole body from feet to head and she settled on his beautiful face. She could see the hint of vulnerability in his eyes. Her heart melted as she realized he was worried about her opinion of him.’

Without any emotion, it would basically read:

‘Adele looked at Dominic. He was naked and aroused.’


It’s certainly shorter, more efficient. But doesn’t really have the same impact does it?

Here’s a longer snippet, from Imogene Nix’ Starfire, this time, let’s start with the stripped down version first:


‘He got up and moved away from her reach.
“No, Jem. You aren’t ready yet, and neither am I.”
“Well, I would certainly beg to differ there.”
She cast a glance toward his groin.
“Jem, don’t make this harder than it is.”
“Do you reckon it could? Get harder, I mean?”
“Jemma, please don’t push this now. I want to build a relationship with you. But we need time to let it grow.”
He moved forward and reached a hand toward her. She rose from the seat, “Raven, I want this and you want this. Here we are, with time we wouldn’t normally have. I don’t want our first time to be rushed and hurried, with you going one way and me the other. Right? Please?”
She moved toward him with her hands outstretched. He moved forward, grabbing her, pulling her closer. His mouth descended on hers.’

Now, as it appears in the book:

‘He got up and moved away from her reach. The redness of his face and the tightly curled hands told her how hard he fought. “No, Jem. You aren’t ready yet, and neither am I.” His voice was hard, gravelly with the desire he warred against.
“Well, I would certainly beg to differ there.” She cast a glance toward his groin.
“Jem, don’t make this harder than it is.”
“Do you reckon it could? Get harder, I mean?” She knew her eyes sparkled as she grinned, and the flush of her skin had to let him know exactly what she wanted, how she burned for his touch.
“Jemma, please don’t push this now. I want to build a relationship with you. But we need time to let it grow.” He moved forward and reached an entreating hand toward her. His eyes told a different story though. He wanted her, and now. She could see it in his face and the way he held his body tightly controlled.
She rose from the seat gracelessly. “Raven, I want this and you want this. Here we are, with time we wouldn’t normally have. I don’t want our first time to be rushed and hurried, with you going one way and me the other. Right? Please?” She moved toward him with her hands outstretched, and it was as if a switch turned. He moved forward, grabbing her, pulling her closer. His mouth descended hard--demanding-- hot. Devouring her with his passion.’

Again, it’s just not the same without emotion.

A well written emotion charged scene will pull in a reader, even if it’s not a genre they usually read. I have never read m/m before, when a friend asked if I’d critique a m/m piece for her. Tamsin Baker is a good friend and we pretty much read everything the other writes. So, I said sure but warned her, I couldn’t help much with the m/m dynamic because I didn’t know much about it. She emailed through her book ‘Truth Be Told’ and I couldn’t put it down.

She’s got so much emotion in there, you can’t help but fall for the characters. Truth be Told is the story of Patrick and Liam, Patrick is firmly in the closet while Liam is loud and proud. Their journey has pain, rejection, acceptance and a few surprises along the way. To give you a taste of the story I’ve included an excerpt from the book, I chosen a scene with no sexual undertones so as not to offend anyone. This scene happens at Patrick's apartment, Patrick and Liam have just woken up after a night together when the door bell rings and Patrick goes to answer it.

‘“I know it’s early, but you have always been a morning person.”
Patrick followed his mother to the kitchen, a horrible feeling of inevitability settling into the pit of his stomach.
His apartment was a three-bedroom, and his bedroom was at the opposite end to the kitchen. They had a chance of not being discovered.
Patrick heard Liam begin walking down the hall. “Patrick, did you get rid of the neighbour?”
Patrick hoped to God that Liam wasn’t naked, but he would be. Patrick called out as casually as possible, striving to keep the panic out of his voice.
“No, it’s my mum.”
“F***…” he heard Liam swearing as he ran back to the bedroom, hopefully to get more than just his pants.
“Who was that? Oh, Patrick, I am so sorry. I never thought you’d have someone over.”
How the f*** am I going to handle this?
“It’s just Liam. He stayed over after we went out last night.”
“Oh, I didn’t think he wanted to go out after dinner.” His mother took out Patrick’s favourite chocolate cake and began filling up the kettle with water.
“Milly changed his mind. We went out and had a few drinks, and thought it would be better if he stayed here.”
Patrick leaned back against the bench, relief filling him. He could brazen this out.
“Just Liam? You’re kidding me, right?” Liam’s angry voice filled the kitchen.
Patrick turned and saw his lover, jeans on, black shirt unbuttoned. He was ruffled but absolutely gorgeous.
His mother’s nervous laugh filled the air. She obviously liked the look of Liam’s naked chest and perfect abs.
“Good morning, Liam.”
“Good morning, Mrs. Considine.” Liam’s tone was curt, but he manged half a smile.
“Oh, please, call me Christine.” His mother looked between Patrick and his furious boyfriend. “Would you like a coffee, Liam, or a piece of cake?”
Liam pulled on his shoes with jerky movements and picked up the keys he’d left on the bench.
“Thank you, Mrs. Considine, but I have to go.”
Liam headed for the front door and Patrick knew he wasn’t coming back. Panic gripped him.
“I’ll walk you out,” Patrick called out as he ran after his lover. Patrick grabbed Liam’s arm as he opened the front door.
“Don’t f***ing touch me.” Heat and fury rolled off Liam in such intense waves, Patrick took a step back.
“Liam, you know I can’t…” He tried to explain. Liam knew that he couldn’t tell his parents the truth. The would never forgive him.
“I know that you are scared sh*tless, and I know that last night meant nothing to you. Because if you had meant it when you said you loved me, you wouldn’t be lying to your mother this morning.”
Patrick heard the gasp behind him and knew his mother had heard what Liam had said. She had always been nosy.
“Goodbye, Patrick.” Liam opened the door and walked out, slamming the door behind him.
Patrick closed his eyes, unable to believe what had just happened. He may have just lost his boyfriend, but had he lost his parents as well?’

The same can work in reverse. A book can have the ultimate best storyline ever conceived. But without emotion, it will seem hollow, and readers will turn away pretty quickly feeling unconnected to the characters. There are lots of tricks to help add emotion. When I’m writing, I put myself into the character’s place. Basically pretend I’m them for the scene, that helps me visualise and really feel what’s happening around the character. I posed the question on the Erotic Writers of Australia facebook page and others said they write detailed profiles for each character before they even start writing the story. I’m simply not that organised to pull that one off. Others said they do an interview with their characters, and another said she runs the scene through her mind like a movie, then writes it out. 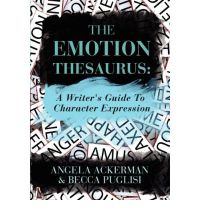 A great way to add emotion is to use a resource like The Emotion Thesaurus. Instead of simply saying “Tina was overcome with her desire.” Explain it out, using the Thesaurus, it can become:
“Tina’s lips parted as she felt her palms grow damp with sweat. She became acutely aware of her pounding heart and the warmth growing between her thighs.”
How much better does that sound? I love this resource and use it every day in my writing.

Well, that’s it for me! I hope I’ve given you all something to think about and helped you increase your emotion in your stories.

Until next time, keep writing.

Khloe Wren
Posted by Unknown at 8:30 AM