UP CLOSE with Sandra O'Grady (who got up-close with Fiona McIntosh!) 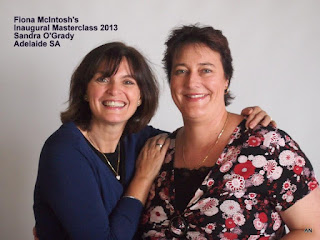 Rather than a traditional Q&A this time around, we got SARA member and romantic suspense writer Sandra O'Grady to spill the beans on her recent master class in Adelaide with bestselling author Fiona McIntosh. Here are her (rather motivational) notes, as follows...

"I attended a five-day master class with Fiona McIntosh in April and left feeling utterly inspired. I was the lucky recipient of an Arts SA grant, which assisted with my attendance.

Bryce Courtenay used to bring sunflowers from his garden to his master classes, so there was a bunch of sunflowers and his photo watching over this group. Keep in mind that everything Fiona taught was aimed at those who want to write and market pop fiction, not fiction that is literary or for a niche market. She said that every story must have a romantic interest. This doesn’t mean a full-blown love affair, but at least an attraction and sexual tension. Women buy the lion’s share of books and so are your main market, so think about what they will respond to.

I learnt that it’s okay to trust yourself. My favourite quote of the week from Fiona was: 'Remember that "to write" is a verb. It requires action not intention.'

Our guest speakers were David Cornish, talented illustrator and author of Monster Blood Tattoo, and two senior acquisitions editors, Ali Watts from Penguin and Lisa Berryman from Harper Collins. Everyone had the opportunity to pitch to the publishers and I’m pleased to say Ali Watts has asked to see my manuscript!

We also had the opportunity to send 10 pages of our work to Fiona. She read it and gave us one-on-one feedback.

Traditional publishers have lost 30-40% of their business since the inception of eBooks and the downfall of bookshops, so they have less leeway to give new authors a chance. Current trends are rural and historical romance, chick-lit and romantic suspense. Fantasy always has a fan base. There is also a desperate need for more chicklet-lit, which is chick-lit fiction for young girls, and chook-lit for older women.

The way books are sold has changed. Traditional publishers used to rely a lot on window shopping in stores, now that doesn’t happen. eBooks are sold mostly by the blurb and reviews.

When marketing yourself, be professional. Having a succinct pitch is paramount and you need to be able to tell the publisher where your book would fit on the store bookshelf.

Fiona researches up to a year ahead of writing, but doesn’t think a lot about her stories before it’s time to write them. She writes for four hours, four days a week, and that means writing, not editing, re-reading or procrastinating. Her key rule is to never go back and read what she wrote yesterday, just keep moving forward until you get to the end. Sometimes she leaves a hanging sentence at the end of each day to prod her forward movement. Her method sounds ridiculously simple when you say it aloud: You need to know what your character wants and what is standing in his/her way, which will provide the conflict.

A common problem is the action not coming fast enough. We live in a world of immediacy and readers expect something for their efforts right away. Within the first page there needs to be enough of a hook to make the reader want to turn the page. In the first few pages the reader needs to have a good understanding of setting, identify with the main character and be invested in finding out what happens to them. Don’t waste words on exposition, because you can drip that in later.

Less is always best. The fewer words you use, the easier your story is to read and understand. Ruthlessly cut adjectives, adverbs, redundant words, conjunctions, and flowery prose.

Inject emotion into the atmosphere of the scene using careful word choices and the five senses. Dialogue is essential for providing crucial information, revealing more about your characters and/or plot.

By the end of the story, your characters must have changed."
Posted by Carla at 6:36 PM

Email ThisBlogThis!Share to TwitterShare to FacebookShare to Pinterest
Labels: Sandra O'Grady, Up Close